17 June 2017 Posted Under: Events and News No Comments
You've probably heard of Craco ghost town. It is a place with a mysterious charm, intriguing, a destination that leaves very clear memories and exciting for those who visit. 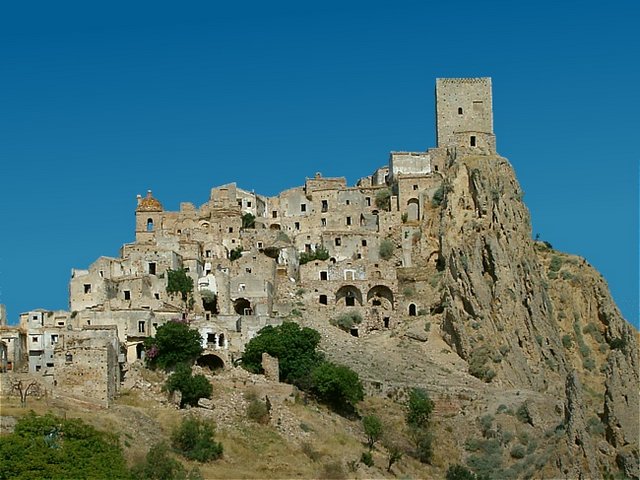 Craco is located in Basilicata, to be exact in the province of Matera, from which it is 58 km. To fully understand the vicissitudes it is interesting to learn about its history, but I can anticipate that if fate had not keen on her, today probably would not be so famous and so sought also by filmmakers who want to shoot, in its narrow streets and among its silent walls, of memorable movie scenes.

The first signs of life in this place, which is located on the hills around Lucan 390 meters above sea level, some graves date back to the eighth century B.C.. In the tenth century Byzantine monks contributed to the development of agriculture in the area, making it a point of reference for neighboring municipalities.

Probably his name derived from “jackdaw”, or small plowed field. They are testimonies of this name in quotes Archbishop Arnaldo di Tricarico, who worked on the year 1060.

Following Craco Herbert was a stronghold of, before, and Roberto of Pietrapertosa later. The history of Craco ghost town was full of ups and downs: It belonged to different families, who enriched the urban area with prestigious buildings such as Palazzo Maronna, Grossi Palace which is one of the most impressive buildings in the country and Palazzo Carbone, whose overgrown driveway of river pebbles undeterred resists the landslide, while the building in danger of collapse.

More recent history which he led to being Craco ghost town as the landslide in 1963 He forced the inhabitants to leave their homes and move further downstream. They were almost two thousand people who had to leave everything and go.

Perhaps the cause is due to infrastructure, water and sanitation, that weakened the foundations, or perhaps it was due to the nature of the place, the fact is that the old town so alive and interesting had to be abandoned in a hurry, leaving almost everything as it was.

Craco ghost town can be visited with the guides and put through a safe route, because its narrow streets, the houses and buildings are unsafe. It's hard to describe what you feel when you see the city. See the doors that guarded the privacy of the families now time-worn and torn. The lining of the kitchens that still graces the kitchenette and makes you think of the couple, building the house that would house his family, He chose precisely those tiles, that design. 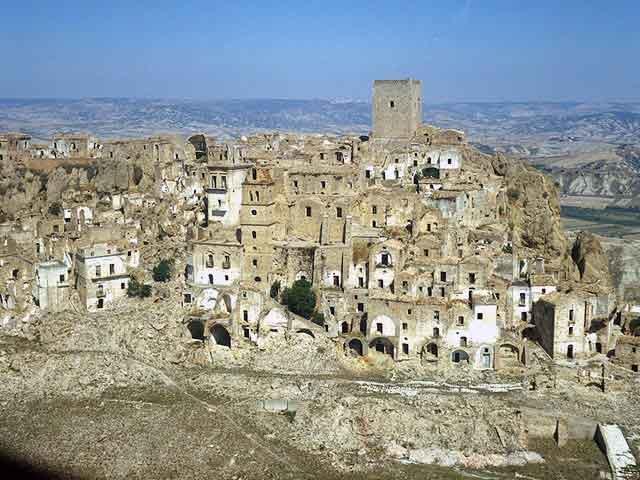 Nature has now resumed its spaces and plants and creepers, shameless, into and out of windows, occupy the floors, They cover furniture abandoned. Not even the church is spared, and among the collapses are the signs of the sacredness of the place. The streets and stairs calling terraced uncultivated, the rubble alternate with flashes of buildings almost intact.

It is difficult to find the right adjective to express what you feel by visiting Craco. E’ a mixture of melancholy, interest, curiosity, acceptance of the power of nature and the smallness of man. E’ beautiful and haunting, exciting and sad, interesting and depressing. But to do.

To get to Craco ghost town must consider about an hour's drive from Matera and an hour and a half from Power. From a distance Craco merges with the hill on which stands; the colors of the houses in ruins, narrow side by side, blend with those of rocks and vegetation is uniform. Even before arriving in its territory, Craco amazes and intrigues. From a distance you can clearly distinguish the Norman Tower and the thirteenth-century castle.

Of course clothing better to immerse yourself in the magical atmosphere of the ghost town is convenient, especially with no heel shoes, hiking or mountain walk.

The dead city of Craco, actually still alive. He lives in recorded images in films like “Passion” in Mel Gibson, in 2004, O “Christ Stopped at Eboli” (1979) Francesco Rosi; He lives in the memories of the inhabitants in the new territory, Craco Peschiera, They continued their lives, recovering from hardships and sorrows, but also he lives in the experiences of those of us who visit.

Entered in the list of monuments to be safeguarded drawn up by the World Monuments Fund, Craco ghost town is now one place, surprisingly capable of giving emotions.

The dead city of Craco, in reality, more alive than ever.