13 November 2017 Posted Under: Events and News No Comments
They set out in search of the mysterious places in Basilicata, fascinating region, keeper of secrets full of charm and legendary, visiting this land that tells compelling stories and magic, I breathed the charm of the mystery that surrounds it.

The Rock of Lagopesole is located in the municipality of Avigliano (Power), It has Norman origins and was acquired by Frederick II between 1242 and the 1250 who used it as a hunting lodge. He ended up in the hands of the Angevin who made it a military use. Among these walls he was imprisoned by Charles of Anjou Elena Ducas wife of Manfred of Sicily, son of Frederick II. Elena let herself die of sadness and grief after her husband's death. 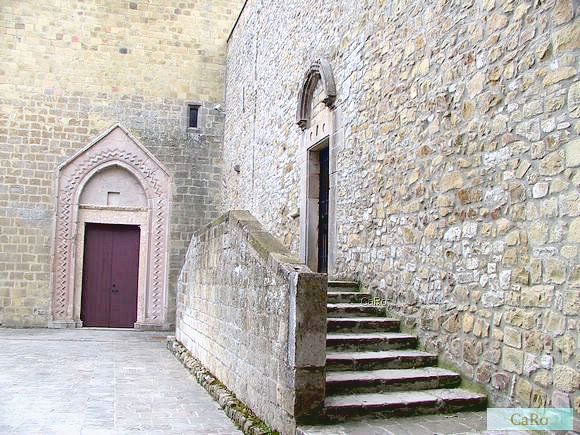 It is said that the ghost of the woman, this “Elena angels”, sobs still in a desperate from a castle window and that her husband Manfredi, riding a beautiful white horse, go to the search of his beloved but never find it.

I happened in August and I attended the reenactment named “At the court of Frederick”where I could enjoy medieval menu, enjoy performances by falconers, mangiafuoco, archery tournaments and ladies fashion shows, knights and jesters. A real dive into court life.

La Rocca del Cappello, across from the Lucane Dolomites, is a monolith high over ten meters where on the top of a large boulder rests that looks like a hat and, on the side where the sun rises, It is engraved a circle of about one meter diameter. Lower down there is a second monolith with the drawing of another circle and a bench said “Chair Devil”.

This entire area, characterized by caves and winding paths, He has led historians to define it as the place where took place the ancient pagan cults. I imagined the priests and priestesses intent to practice sacred rituals and mysterious dedicated to the gods.

Even the Castle Grottole, Always in the Province of Matera, It has its fair share of Abufina legend, He is trying to reach her beloved Slepino, Warrior's orders Count of Chiarodimonte, died drowned in crossing the river. In the full moon day of April and June, his ghost appears at the tower of the castle window.

Surely I will return at that time hoping to try the inexplicable thrill that may cause the view of a ghost but also to continue the search for mysterious places in Basilicata.

At the foot of Mount Vulture, volcanic, is the Benedictine Abbey of St. Michael built by monks over ancient caves in 1700.

The building seems hung to a ridge of the mountain peak on one of the lakes of Monticchio and legend has it that in that place they hide many robbers who passed down stories full of mystery of magicians, sorceresses and a mischievous sprite called Monacello.

Fascinated by this region called ancient Lucania, I continue my journey in search of the mysterious places in Basilicata and I go in Acerenza, one of the most beautiful medieval villages of Italy about 35 Km from Potenza.

Suddenly I get imposing cathedral that dates back to’ eleventh century. It is said that inside there is a secret crypt which houses the Holy Grail. Anyone who knows the history of the Templars will know that the Holy Grail is the cup from which Jesus drank wine at the Last Supper.

I do not find in England, in France, in Wales but in Basilicata, region that has gained since ancient times kings, regine, popes and even Templar.

My journey continues uphill to the discovery of the mysterious places in Basilicata. I venture between the peaks of the Dolomites of Lucania and arrival in Castelmezzano, hamlet built in the tenth century d.C. dove, about the Holy Grail, I find several symbols scattered around the country and the coat of arms depicting two knights on one horse as evidence that there was a Templar house.

The church of Santa Maria dell'Olmo, built near an elm and a water source always considered symbols of eternal life, offer the opportunity to pass on an ancient pagan tradition that every year, in May repeats and which consists sexually uniting a tree trunk to a top of holly to celebrate the luxuriance of nature.

The “Marriage Tree” renews soil fertility with climbing the trunk of a resident who, reached the top, It gives demonstration of courage and contributes to the success of the festival.

This interesting journey, the discovery of a land with a mysterious charm full of intrigue and betrayal with legends that blend reality, He was fascinated especially by what you do not see but you imagine running with fantasy in mysterious places in Basilicata.